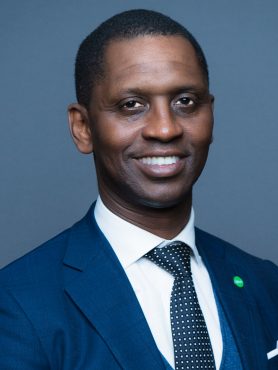 After gaining a degree in Telecom Engineering from France and an MBA from the United States, Kabirou Mbodje returned to Senegal in the 1990s to launch entrepreneurial ventures focused on new technologies.  In 2003, he created NetPay (which later became CallMoney), a payment solution based on mobile subscriptions.  In 2008, building upon this experience, he launched Wari a unique digital payment platform at the heart of the continent’s financial inclusion.

As a digital platform for financial and non-financial services, Wari’s solutions address the daily needs of millions of customers such as paying utility bills, buying airtime or transferring wages at a lower cost. Wari currently boasts 212 million active users and manages over a million transactions per day which translates into more than 6 billion dollars of annual flow. In 2018, Wari is present  in more than 60 countries through 152 partnering banks, 500,000 points of sale and is a major actor in the digitalization of African economies.

Kabirou Mbodje believes that Africa will create tomorrow’s economic and digital model. He frequently observed that, as it had been the case for the telecom sector, Africa is swiftly leaping over the intermediary steps in the digital sector evolution. In his opinion, the continent can count on its economic vitality, its capacity to develop new services and its potential for initiatives.

Kabirou Mbodje was born in Lyon, France and holds a dual French-Senegalese citizenship.