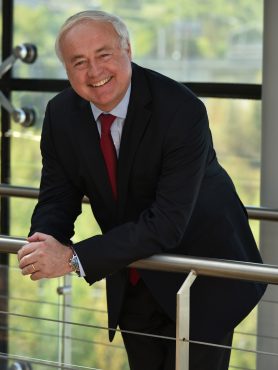 Jean-Marc Chery is STMicroelectronics’ President and Chief Executive Officer, and has held this position since May 31st, 2018. He is the Sole Member of ST’s Managing Board and chairs its Executive Committee.

Chery began his career in the Quality organization of Matra, the French engineering group. In 1986, he joined Thomson Semiconducteurs, which subsequently became ST, and held various management positions in product planning and manufacturing, rising to lead ST’s wafer fabs in Tours, France, and later in Rousset, France. In 2005, Chery led the company-wide 6-inch wafer-production restructuring program before taking charge of ST’s Front-End Manufacturing operations in Asia Pacific. In 2008, he was promoted to Chief Technology Officer and assumed additional responsibilities for Manufacturing and Quality (2011) and the Digital Product Sector (2012). In 2014, Chery was appointed ST’s Chief Operating Officer responsible for Technology and Manufacturing operations. In July 2017, Chery was appointed Deputy CEO with overall responsibility for Technology and Manufacturing, as well as for Sales and Marketing operations.

Chery currently chairs the board of directors of STS, ST’s manufacturing joint venture in China, and holds a board membership at the European microelectronics R&D program AENEAS.

Jean-Marc Chery was born in Orleans, France, in 1960, and graduated with a degree in Engineering from the ENSAM engineering school in Paris, France.