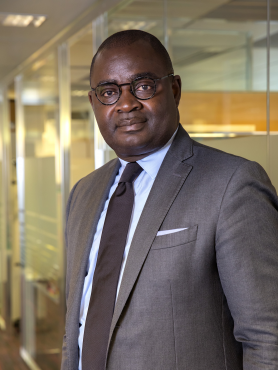 Ibrahima Diouf has been appointed Chief Executive Officer of EBI SA, the international subsidiary of pan-African Group Ecobank, after a career spanning more than 25 years in the banking sector in Africa and abroad.

Ibrahima Diouf started his career as Chief Operating Officer of BICIS, a subsidiary of French banking group BNP in Senegal, in 1989, before joining Citigroup in 2000. He later worked in Brussels and London before joining Barclays Bank in Dubai in 2007.

In 2011, he was hired by Ecobank as member of the Group Executive Committee and Director in charge of internal audit. He was based in Lomé, before joining EBI SA in Paris.

Ibrahima Diouf is a Harvard Business School graduate (Advanced Management Program – AMP/Boston). In addition, he holds a MBA from the University of Dallas (Texas) and a Master degree in Business Management from EDC (Paris).