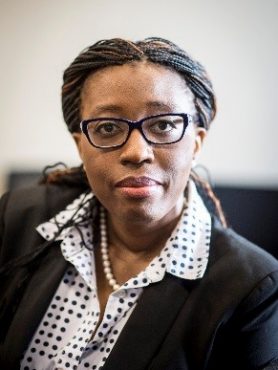 Ms. Vera Songwe is the International Finance Corporation (IFC – the private sector arm of the World Bank Group) Director for West and Central Africa, based in Dakar. She oversees the corporations’ investment decisions and public relations in these countries. Prior to joining the IFC, she was Country Director of the World Bank Senegal, Mauritania, The Gambia, Cabo Verde and Guinea Bissau.

Ms. Songwe joined the World Bank Group as a Young Professional. She has experience working in the Middle East and North Africa and extensive experience on the East Asia and Pacific region where she worked as a policy economist on micro and macroeconomic issues as well supporting project implementation in the area of fiscal policy, trade, and governance among others.

Prior to joining the Bank, Ms. Songwe was a Visiting Scholar at the University of Southern California and at the Federal Reserve Bank of Minneapolis, USA. She has published several articles on governance, fiscal policy, agriculture and commodity price volatility and trade and the new financial infrastructure. She is a non Resident Senior Fellow at the Brookings Institution. She also is one of nine members of the African Union Reform Committee chaired by President Kagame.