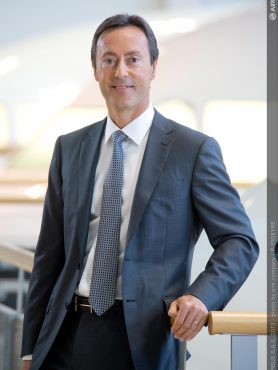 Fabrice Brégier was appointed President and Chief Executive Officer (CEO) of Airbus on the 1st of June 2012. He is a member of the Airbus Group Executive Committee.

Fabrice Brégier started his career in 1983 as a test engineer at the Creys-Malville nuclear power station, becoming sales manager for Péchiney (Japan) in 1984. In 1986 he joined the DRIRE Alsace (Ministry of Industry) and was then appointed Director of Economic and Financial Affairs with the Ministry of Agriculture in 1989.

Having been Advisor to several French Ministers, Mr. Brégier joined Matra Défense in 1993 as Chairman of the Apache MAW GIE (co-operation with Dasa) and Chairman of the Eurodrone GIE (with STN-Atlas). In 1996 he was appointed Director of Stand-Off activities (Apache, Scalp EG/Storm Shadow) in what had become Matra BAe Dynamics.

In 1998, Mr. Brégier became CEO of Matra BAe Dynamics. He was appointed CEO of MBDA, the leading European missile systems company that was created in 2001 by Aerospatiale Matra, British Aerospace and Finmeccanica. In 2003, Fabrice Brégier became President and CEO of the Eurocopter Group and was appointed Head of EADS’ Eurocopter Division in June 2005.

Mr. Brégier was appointed Airbus Chief Operating Officer (COO) in October 2006. As a Member of the EADS Executive Committee, he was commissioned by Louis Gallois to improve the overall operational performance of the Group. His responsibilities included the company’s wide-ranging restructuring and change programme (Power8), the Executive Committee functions Operations, Engineering and Procurement, and the A350 XWB programme.Mr. Brégier graduated from the Ecole Polytechnique in 1980 and from the Ecole des Mines. He was born in 1961 in Dijon, France.   He is also a Member of the Board of Directors of Engie.