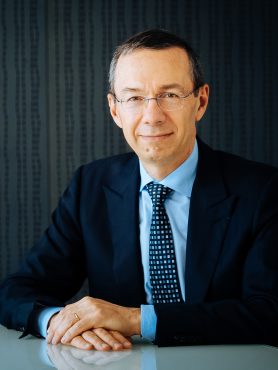 Eric Labaye is a Senior Partner of McKinsey & Company based in Paris. He works extensively for clients in the Telecom, Media, High-tech, and Energy sectors, as well as for public and health institutions on a variety of strategic and operational issues including major transformation programs. He served as Managing Director of McKinsey’s France Office from 2002 to 2010 and as a member of the Global Operating Committee of the firm, leading Global Knowledge and Communications, from 2010 to 2013. He chaired the McKinsey Global Institute from 2010 to 2016 and is currently a member of its council. He also served for nine years on the Shareholders Council (global board) of the firm, chairing the client committee.

In addition to his client work, Eric has conducted major research projects with the McKinsey Global Institute in the fields of economic development, productivity, digital transformation, and the future of Europe. He also initiated and co-led McKinsey’s “Women Matter” research program, which since 2005 aims to promote gender diversity in senior management at large companies.

He is a graduate of Ecole Polytechnique and Telecom ParisTech and holds an MBA with distinction (Henry Ford II award) from INSEAD.