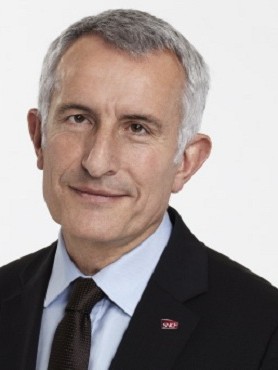 Following the reorganisation of SNCF group and its unification with RFF (Réseau Ferré de France, owner of the French railway network until 2015), Guillaume Pepy was named Chairman of the Management Board of the newly-created SNCF Holding, as well as Chairman & CEO of its SNCF Mobility business.

Guillaume Pepy was first appointed Chairman of SNCF group in 2008 and was reappointed in 2013.

As Chairman, he has focused on restructuring SNCF to ensure it is well-placed to face competition and strengthen its position as a key player in the global transport and logistics sector.

After holding various positions in public and government service – including Head of Staff for the Minister of Employment and Social Affairs, and for the Minister of Public Service – and in the private sector as Deputy CEO of SOFRES, Guillaume Pepy became part of the senior management team within SNCF. He was Director of Strategy and then Director of Passenger Activities before becoming acting CEO in 2008. Other responsibilities have included his chairmanships of Eurostar Group, of Voyages sncf.com and of Systra, and serving on the Board of Keolis.

Present in 120 countries and with a total workforce of over 260,000, SNCF is a world leader in passenger and freight transport services. SNCF expects to generate revenue of over €30 billion in 2015 with 25% of sales from markets outside France.

SNCF serves 10 million passengers every day around the world.