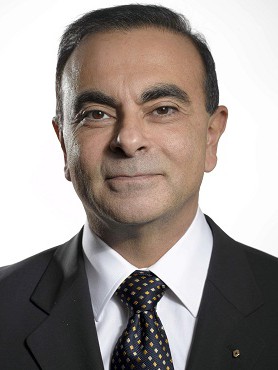 Renault, Nissan and AVTOVAZ together sold nearly 8.5 million vehicles in 2014 – more than one in 10 cars worldwide. The Alliance companies employ a total of more than 450,000 people in nearly 200 countries.

Mr. Ghosn has been the industry’s leading advocate for sustainable transportation; Renault and Nissan are the first automakers to have launched a range of affordable zero-emission cars and commercial vehicles. Through 2014, the Alliance companies had sold more than 217,000 electric vehicles – exceeding the total of all other major automakers combined.

Mr. Ghosn joined Nissan as chief operating officer in 1999, became its president in 2000 and chief executive officer in 2001. He was the lead architect of the Nissan Revival Plan, which brought the company out of a severe economic crisis in the late ‘90s and back to profitability in 2000.

In 2005, Mr. Ghosn became chief executive officer of Renault – becoming the first person to run two Fortune Global 500 companies simultaneously. In 2009, he added the title of chairman of the board of Renault. In 2013, he was elected chairman of AVTOVAZ.

Renault and Nissan enjoy the most productive and longest-lasting cross-cultural partnership in automotive history. The Alliance also has significant strategic collaborations with Daimler of Germany, China’s Dongfeng Motor, Japan’s Mitsubishi Motors, and Ashok Leyland of India.

In addition to his leadership roles at Renault, Nissan, the Alliance and AVTOVAZ, Mr. Ghosn is president of the European Automobile Manufacturers’ Association (ACEA) through 2015.

Before joining Renault in 1996, Mr. Ghosn had worked with Michelin for 18 years. As chairman and chief executive officer of Michelin North America, Mr. Ghosn presided over the restructuring of the company after its acquisition of the Uniroyal Goodrich Tire Company in 1990. Previously, Mr. Ghosn had worked as the chief operating officer of Michelin’s South American activities based in Brazil; as head of research and development for industrial tires in Ladoux, France; and as plant manager in Le Puy, France.

Mr. Ghosn is the only major auto industry CEO who grew up in emerging markets. He was born in Brazil in 1954 and spent much of his childhood in Lebanon. He graduated with engineering degrees from France’s Ecole Polytechnique in 1974 and from Ecole des Mines de Paris in 1978.