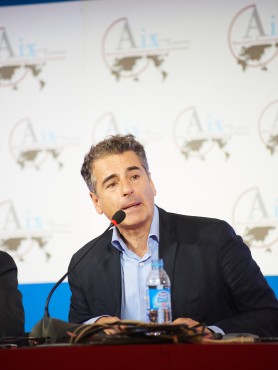 Andrés Velasco was a presidential candidate in Chile in 2012-13. He also was the Minister of Finance of Chile between March 2006 and March 2010. During his tenure he was recognized as Latin American Finance Minister of the Year by several international publications. His work to save Chile´s copper windfall and create a rainy-day fund was highlighted in the Financial Times, the Economist, the Wall Street Journal and Bloomberg, among many others.

Since September 2013 he has been Professor of Professional Practice in International Development at the School of International and Public Affairs, Columbia University. In 2011-12 Mr. Velasco was the Edward Larocque Tinker Visiting Professor at the same institution. He is also Senior Academic Advisor to the Blavatnik School of Government at Oxford University. For the last two years he has been a member of the Global Ocean Commission.

Mr. Velasco is a founder of SCL Partners, an economics and finance advisory firm based in Santiago, Chile. He has advised governments, global businesses and multilateral financial institutions.

Andrés Velasco received a B.A. in economics and philosophy and an M.A. in international relations from Yale University. He holds a Ph.D. in economics from Columbia University and was a postdoctoral fellow in political economy at Harvard University and the Massachusetts Institute of Technology.

Prior to entering government, Mr. Velasco was Sumitomo-FASID Professor of International Finance and Development at the Harvard Kennedy School of Government, an appointment he had held since 2000. Earlier he was Associate Professor of Economics and Director of the Center for Latin American and Caribbean Studies at New York University.

Mr. Velasco is the author of nearly one hundred academic articles, several academic books and two novels (in Spanish). He has been a consultant to the International Monetary Fund, the Inter-American Development Bank, the World Bank and ECLAC.

He was president of the Latin American and Caribbean Economic Association (LACEA) from 2005 to 2007. In February 2006 he received the Award for Excellence in Research from the Inter-American Development Bank.

He is married to Consuelo Saavedra, a journalist and television anchorwoman. They have three children: Rosa, Ema and Gaspar.