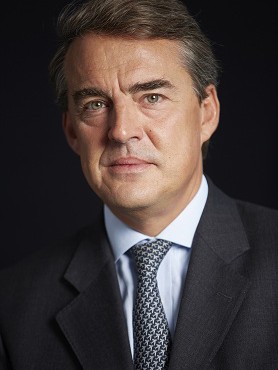 Born in 1962, a graduate of the Ecole Polytechnique in Paris and the Ecole Nationale de l’Administration, Alexandre de Juniac began his career in 1988 as Auditor then Master of Petitions and Deputy Secretary General of the Conseil d’Etat (State Council).

From 1993 to 1995, he was technical advisor then deputy Head of office of Nicolas Sarkozy, at the time Minister of the Budget and Government spokesperson.

Appointed Secretary General of Thomson-CSF in 1999, which subsequently became Thales in December 2000, he became Senior Vice President of the Air Systems Division in 2004 before taking up position as Vice President Asia, Africa, Middle East and Latin America in 2008.

In 2009, he was appointed Head of the office of Christine Lagarde, Minister of Economic Affairs, Industry and Employment.

Alexandre de Juniac has been appointed Chairman and CEO of Air France in November 2011.

He is also Director of Vivendi.