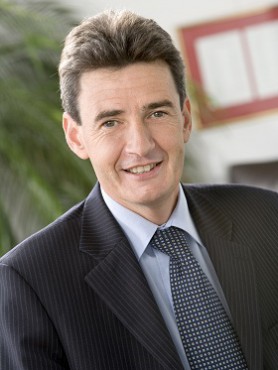 Philippe de FONTAINE VIVE CURTAZ is the senior Vice-President of the European Investment Bank (EIB). He is responsible for innovation, corporate responsibility and relations with civil society as well as for activities in France and in the Mediterranean partner countries.

Philippe de FONTAINE VIVE CURTAZ was born on 31 August 1959, in Marseille. He has an Econometrics degree, graduated from the Institut d’études Politiques de Paris, and is a former student of the Ecole Nationale d’Administration.

From 1986 to 1990, Philippe de FONTAINE VIVE CURTAZ was Assistant to the Head of the Banking Office then Assistant to the Head of the Equipment Office at the Treasury.He was then appointed Alternate Executive Director for France at the World Bank in Washington. From 1992 to 1994, he came back to the Treasury as Head of the Non-Life Insurance Office. From 1994 to 1995, he was International Adviser to the Minister of Economy and Finance. In 1995 and 1996, he was Head of the Transport and Urbanization Office in the Treasury and General Secretary of the Board of FDES (Economic and Social Development Fund). From 1996 to 2000, he was Deputy Assistant Secretary for International Affairs in the Treasury in charge of bilateral relations, development and debt issues; he was also Vice-President of the Paris Club. From 2000 to May 2002, he was Deputy Assistant Secretary for state-owned companies and from June 2002 to February 2003, he was Assistant Secretary for domestic affairs in the Treasury. From 2003 to 2006, he supervised EIB financial operations, financing SME’s throughout Europe, activities in France and Mediterrranean partner countries.