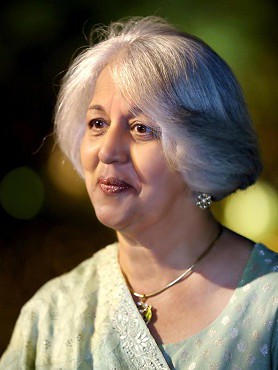 ISHER JUDGE AHLUWALIA is Chairperson, Indian Council for Research on International Economic Relations (ICRIER), where she also leads the Research and Capacity Building Program on Urbanisation in India. She was Chairperson of the High Powered Expert Committee on Urban Infrastructure and Services from 2008 to 2011.She is Member, National Manufacturing Competitiveness Council.She was awarded Padma Bhushan by the President of India in 2009 for her service in the fields of education and literature.

Dr. Ahluwalia is on the Board of Trustees of IWMI (International Water Management Institute), and was Chairperson, Board of Trustees of IFPRI (International Food Policy Research Institute), Washington D.C., from 2003 to 2006. She was a member of the Eminent Persons Group (EPG) on India-ASEAN (Association of South East Asian Nations), an association established by the respective governmentsduring the period 2011-12.Shewas also amember of the EPG of the Asian Development Bank from 2006 to 2007, which submitted its report titled “Towards a New Asian Development Bank in a New Asia” to the President, ADB in 2007. Besides being on the Boards of a number of Research Institutes in India, Dr Ahluwalia is also an Independent Director on the Board of SAIL (Steel Authority of India).
Dr Ahluwalia has written numerous books and published many articles in professional journals.Her latest books includeTransforming Our Cities: Postcards of Change (HarperCollins), a co-edited volume, Urbanisation in India: Challenges, Opportunities and the Way Forward(Sage India) with Prof Ravi Kanbur of Cornell University and Dr P K Mohanty, Chief Secretary, Andhra Pradesh, and a co-edited volume, India’s Economic Reforms and Development: Essays for Manmohan Singh (OUP India) with Prof. I.M.D. Little of Oxford University . Her research has focused on urbanisation, sustainable public service delivery, industrial growth and productivity, macro-economic reforms, and social sector development.

Dr. Ahluwalia received her B.A. (Hons) from Presidency College, Calcutta University, M.A. from the Delhi School of Economics, and Ph.D. from the Massachusetts Institute of Technology (MIT), all in economics.