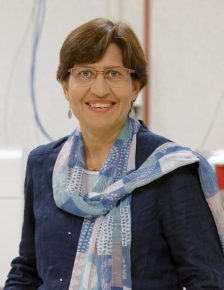 
Dr. Valérie Masson-Delmotte, 49, has a background in fluid physics (Ecole Centrale Paris) and climate science. Her research is focused on quantifying and understanding past changes in climate and atmospheric water cycle, using ice cores, tree-rings as well as present-day monitoring, and climate modelling for the past and the future (www.lsce.ipsl.fr). She works on glacial-interglacial variability, abrupt climate change, drought, climate response to volcanic eruptions, polar amplification, climate feedbacks, ice sheets. She is active in outreach for children and for the general public. Her research was recognized by several prizes such as the European Union Descartes Prize for the EPICA project, 2008; Women scientist Irène Joliot Curie Prize, 2013; Tinker-Muse Prize for science and policy in Antarctica, 2015; Highly Cited Researcher in Geosciences since 2014; Nature’s top 10 in 2018; CNRS silver medal in 2020; SCAR President’s medal and EGU Milankovicz medal in 2020. She is a member of the French Academy of Technologies and the European Academy of Sciences. She is a member of the French “Haut conseil pour le climat” (national climate change committee, www.hautconseilclimat.fr). Since 2015, she is a co-chair of the Working Group I (physical science basis of climate change) of the IPCC, and has co-supervised several special reports (1.5°C; climate change and land; ocean and cryosphere) and the 6th assessment report to be released on August 9, 2021 (www.ipcc.ch).