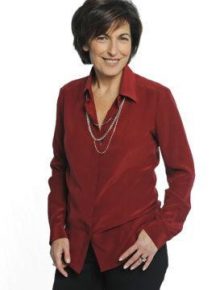 
Ruth Elkrief was born December 1st, 1960 in Meknes, Morocco. Graduated from the « Institut d’Etudes Politiques » of Paris and from the « Centre de formation des journalistes » of Paris, she has started her career by working for the American AP agency (Associated Press), and then has integrated the political department of the French daily newspaper “Le Matin de Paris”. In 1987, she joins the French TV channel TF1, and then became the permanent correspondent in the United States of America in 1990. She then left her office in Washington to become the head of the political department of TF1 and presents the 11PM journal on weekends. For years later, the TF1 group launches its own news channel called LCI, and Ruth Elkrief is in charge of sharing the presentation of the “Grand Journal” with the future TV news presenter of France 2, David Pujadas. From time to time, she is being called to realize daily interviews from 7PM to 8PM. In September 1999, TF1 broadcasts her program called “19h Dimanche”, in succession of “Sept sur Sept” presented by Anne Sinclair and “Public” by Michel Field. 2001 – 2005 : RTL In 2001, Ruth Elkrief headed to radio with the French RTL radio who hires her to present a daily political appointment during 2 years. From 2003 to 2005, she enlivens the “Grand Jury”, a program broadcasted together on LCI and RTL, in partnership with the newspaper Le Monde. In parallel with her activity in the Medias, she is also teaching journalism at the “Institut d’Etudes Politiques” of Paris in 2004. Ruth Elkrief added a competence to her portfolio by coproducing the program “C’est déjà demain” broadcasted on Canal +. Following LCI, Ruth Elkrief begins the presentation of a program dedicated to cinema, “Après la sortie”, on Channel 5. From 2005: presenter and editorialist in BFMTV BFMTV, new news channel in live, appears in 2005 in France. Ruth Elkrief, strong of 20 years of experience, is directly integrated to the team. She is presenting 2 daily journals of half an hour, at 6PM and 7PM. The following year, the channel reveals her second version and entrusts her the time slot from 6PM to 8PM, with the national and international news, the stocks items and press reviews. From November 2006 and during a year and a half, Ruth Elkrief animates with Hedwige Chevrillon, a weekly appointment of political news that gathers both BFMTV and BFM radio under the title « Le Duo BFM ». She then presents a program called “Elysée 2007” dedicated to the presidential elections and keeps her time slot at the launch of the third version of BFMTV in June 2007 and her program called “19h Ruth Elkrief”. During first semester of 2008, she continues her collaboration with Hedwige Chevrillon and joins Olivier Mazerolle around the emission “La Tribune BFM”, which was a 60 minutes program on Sundays broadcasted at 6PM. The following summer, Ruth Elkrief receives the insignias of the French “Legion d’Honneur” and enlivens a program from noon to 2PM: “Midi Ruth Elkrief”. From 2010, Ruth Elkrief incarnates one of the most popular time slot of BFMTV “19h Ruth Elkrief” from 7PM to 8PM, where she offers the audience all her knowledge and expertise in politics, and welcomes every day the actors of current events. In « 19h Ruth Elkrief », she writes in live the news with her guests, leading interviews and debates. Politics, sociologists, specialists, writers or philosophers join her program and confront the point of views. From march 2021, she is columnist at LCI-TF1