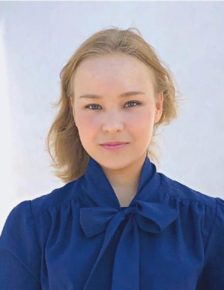 
Under the mandate of the Finnish Government, Ninni Norra served as the national citizens’ representative of Finland in the Conference on the Future of Europe taking place in 2021-2022. As a Plenary member, she made contributions in the working group on values and rights, rule of law, and security, while collaborating with national institutions such as the Finnish parliament and the future fund Sitra, as well as EU-level actors such as the European Economic and Social committee. Norra has appeared in both national and international media, giving insights on European politics, the euro area, and the general state of the public debate on the EU.

Norra is a journalist in a multilingual magazine Tähdistö, which specialises in EU politics. She has written articles for other institutions as well, including the Finnish Ministry of Foreign Affairs. Norra has participated in developing digital tools for citizen engagement and pioneered in projects such as This Time I’m Voting, and the 2020 EU Youth Summit of Finland. Norra is a small investor in several companies and a more significant shareholder in a freshly founded investment company.

Norra is a recent upper secondary school graduate and an alumna of numerous programs, including the European Youth Parliament, AFS Intercultural Programs, and the Investing Ambassadors, a selective training for Finnish youth between the ages of 15 and 18. Norra hopes to continue her studies to better understand economics and technology, and how they affect global trends.