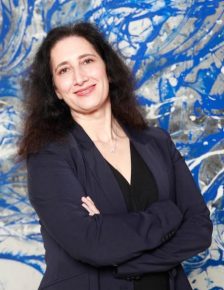 Isabelle de Silva is a member of the Conseil d’Etat, the French supreme administrative court, which she joined in 1994 after graduating from Ecole des Hautes Etudes Commerciales, the Community of European Management Schools, the Sorbonne University in philosophy and Ecole Nationale d'Administration, the French national school for civil service.

After holding different positions as auditeur (1994) and then maître des requêtes (1998) at the Conseil d’Etat, she became commissaire du gouvernement at the Second and then Sixth Chamber of the Conseil d'Etat (2000-2009), and was later promoted to the rank of conseiller d'Etat (2009). She has been appointed as president of the Sixth Chamber of the Conseil d’Etat in 2013, in charge of cases in the field of justice, finance, environment and regulated professions.

She was an adviser to the Minister of Culture and Communications, in charge of the press and the radio (1999-2000), director of legal affairs of the Ministry of Ecology, Sustainable Development, Transport and Housing (2009-2011), and became a member of the sector regulator for press distribution in 2012.

She had been a member of the board of the Autorité de la concurrence since 2014.