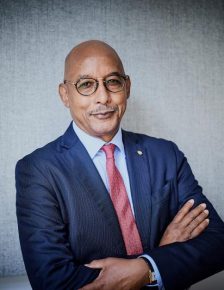 
Dr. Ibrahim Assane Mayaki is currently the CEO of the African Union Development Agency (AUDA-NEPAD). Minister of Foreign Affairs and Prime Minister of Niger between 1997 and 2000, Dr. Mayaki holds a Master's degree from the National School of Public Administration (ENAP), Quebec and a PhD in Administrative Sciences from the University of Paris I, France. He has worked as a professor of public administration in Niger and Venezuela.

In particular, he worked in a think tank specialising in health and education policies before becoming the CEO of the New Partnership for Africa's Development (NEPAD) in January 2009 and leading the transformation of this institution into the African Union Development Agency (AUDA-NEPAD) in July 2019.

AUDA-NEPAD is, to date, the only continental development initiative with convincing results in areas such as agriculture, infrastructure, industrialization and regional integration.