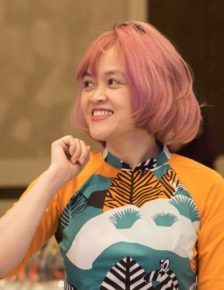 
Hong Hoang is the Founder and Executive Director of CHANGE, a dynamic Vietnamese NGO with the mission to address the country’s most critical environmental issues, including climate change, illegal wildlife trade, and pollution, through strategic communications, community empowerment, and cross-sector partnership.

Under Hong’s leadership, CHANGE has coordinated over 200 activities since its establishment in 2013 to raise awareness, build capacity, engage the community in action campaigns to protect wildlife, reduce wastes, emissions, and other human impacts on the environment, and promote sustainability.

Hong was one of the 12 rising civic leaders from 12 nations joining the first cohort of the Obama Scholars Program at Columbia University in New York City during 2018-2019.

Hong was listed by Forbes Vietnam among the 50 most influential Vietnamese women in 2019. She was also awarded among the Top 5 Ambassadors of Inspiration at WeChoice Awards 2019. Also in 2019, she won the Green Warrior of the Year title at Elle Style Awards.

Hong Hoang was recognized by climateheroes.org in 2015 as a Climate Hero for her contributions to building the community-led climate movement in Southeast Asia and Vietnam.

Beyond her work at CHANGE, Hong has been a renowned environmentalist for over 20 years, after being the first Vietnamese person ever to set foot on Antarctica in 1997, in an expedition to raise attention on the global climate issue. She became a Special Junior Envoy of the UNESCO and received a Certificate of Merit from the Vietnamese Prime Minister for her achievements.