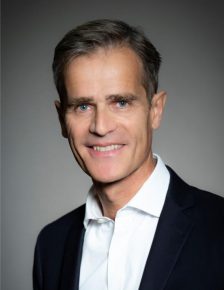 
Born on 12 March 1964, Nicolas Gomart is a graduate of ESSEC Business School (1985) and the Centre for Advanced Insurance Studies (CHEA).

In 1987, he began his career as an options trader at Banque Indosuez (now Indosuez Wealth Management) before becoming partner and co-founder of Transoptions Finance of the Crédit Agricole Group. In 1996, he joined Dexia Asset Management first as Structured and Alternative Management Director then as Multi-management and Diversified Management Director in 2000. He joined ADI Alternative Investments in 2003 to set up the incubation subsidiary NewAlpha there. He became Chief Operating Officer and member of the Executive Board of ADI in 2006 and Deputy CEO of OFI Asset Management in 2009.

In 2012, he joined the Matmut Group where he held the position of Deputy CEO in charge of accounts and investments before being appointed in 2013 to the post of Chief Operating Officer in charge of central resources. In April 2015 he was named the Group’s CEO.