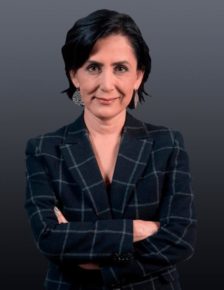 
Edna Jaime has more than 25 years promoting transformations in the public policies of the country from organized civil society. She is the founder and general director of México Evalúa, a group of experts dedicated to the analysis and evaluation of public policies regarding public spending, security, justice and anti-corruption.

She is president of the Council of the School of Social Sciences and Government of Tecnológico de Monterrey; Executive Advisor of the Paris Peace Forum; President of the Board of Directors of Youth Build México; global fellow of the Wilson Center in Washington D.C, and associate of the Mexican Council of International Affairs (COMEXI). The Autonomous Technological Institute of Mexico (ITAM) awarded her the “Professional Merit” award in 2011, and was awarded the Medal of the Upper House of France, maximum recognition given annually to the most outstanding leaders in strengthening the relationship Franco-Mexican President of the School of Social Sciences and Government of the TEC of Monterrey.

From a young age she began her career in thought centers in Mexico. She started as a researcher at the Development Research Center (CIDAC), a pioneer think tank in the country. Later she became director of it. She is a member of the Civic Data Council and participant in the Transparency Commission of the Nuevo León Council for Strategic Planning.

From the field of analysis and public policy proposals, she has promoted important transformations such as the creation of the National Anti-Corruption System, as well as the drafting and revision of the relevant laws for accountability in the country. For the recognition of this work, she was elected by the Mexican Senate as a member of the Commission of the Selection Committee of the National Anti-Corruption System, which she presided until October 2019.

ITAM political scientist. She is a columnist for the newspaper El Financiero and contributor to the radio news program "Leonardo Curzio en Formula"

Among her main works are The riddle of legitimacy, in collaboration with Luis Rubio, Accountability and fight against corruption: challenges and challenges and Mexico Under Fox. In addition to having collaborated in numerous collective works under the seal of CIDAC and México Evalúa.