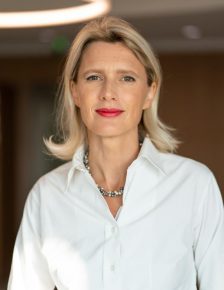 
Clarisse Kopff is CEO and Chairperson of the Board of Management of Euler Hermes, the world’s leading trade credit insurer.

She is a graduate from ESCP and holds a postgraduate degree from Université Paris Dauphine and the German ‘Diplom-Kaufmann’.

She began her career in debt origination at Lehman Brothers in London, then as an auditor with PricewaterhouseCoopers in Paris before joining Euler Hermes in 2001 as controller for the company’s French entity in Paris. From 2007, she served Euler Hermes in several positions of increasing responsibility and international scope: head of controlling for French and Mediterranean activities (2007-2011); head of Group controlling (2010 – 2012); head of accounting, controlling, actuarial services and investor relations (2012-2013); Group head of finance (July 2013). Recognized for her customer-centricity, she was promoted as Group Chief Financial Officer in 2014 where she was responsible for all Group finance functions, asset management, legal and compliance, M&A, tax and risk and capital management. She served as Chief Financial Officer of Allianz France from 2018 to 2020. In January 2021, she joined Euler Hermes as CEO and Chairperson of the Board of Management of Euler Hermes.