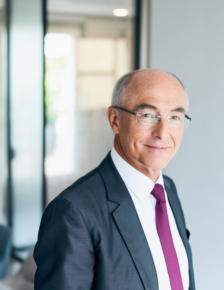 
A graduate of CentraleSupélec (École Centrale Paris), Benoît Potier joined Air Liquide in 1981 as a Research and Development engineer. After serving as a Project Manager in the Engineering and Construction Division, he was made Vice-President of Energy Development in the Large Industries business line. In 1993, he became Director of Strategy & Organization and, in 1994, was put in charge of the Chemicals, Metal & Steel, Oil and Energy Markets. He was made an Executive Vice-President of Air Liquide in 1995 with additional responsibilities over the Engineering & Construction Division and the Large Industries operations in Europe. Benoît Potier was appointed Senior Executive Vice-President in 1997. He was appointed to the Board of Directors in 2000 and became Chairman of the Management Board in November 2001. Benoît Potier served as Chairman and Chief Executive Officer of Air Liquide from 2006 to 2022. He has been holding the office of Chairman of the Board of Directors of Air Liquide since June 1st, 2022. Functions within the Air Liquide Group • Chairman of the Board: L’Air Liquide S.A.* • Chairman and CEO: Air Liquide International, Air Liquide International Corporation (ALIC) • Director: American Air Liquide Holdings, Inc., The Hydrogen Company, Air Liquide Foundation Positions or activities outside the Air Liquide Group • Member of the Supervisory Board: Siemens AG* (member of the Nominating Committee) • • Co-chair: Conseil National de l'Hydrogène • • Member: - European Round Table (ERT), Paris-Saclay university Strategic Orientation Committee (COS), Asia Business Council, Singapore International Advisory Panel on Energy, H2 Council, Temasek