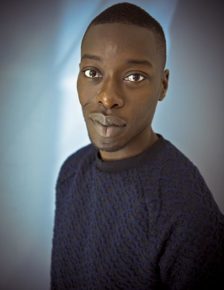 
Omar Victor Diop developed an interest in photography at an early age. As a child, he was nourished by the masterpieces of Afro-Caribbean literature, and by characters such as "Ségou" by the author Maryse Condé, who go from being a "foreigner" to a "notable" in a given society. Omar Victor Diop sees this journey as representative of his own, one in which he has found himself on the side of minorities who have to learn from models of adaptation to different contexts and new ways of being.

A graduate of the Ecole Supérieure de Commerce de Paris, he first worked on the African continent in multinational companies. However, he ended a career in corporate communications to devote himself fully to his career as an artist, and enjoyed great success at the Rencontres de Bamako, a biennial event for African photography in 2011. Omar Victor Diop's work is distinguished by a combination of visual arts, fashion and photographic portraiture. He is particularly fond of mixing photography with other art forms, including textile design, fashion design and creative writing to bring his inspiration to life. For him, art is the only dialogue that will never cease, a dialogue that is constantly inspired by those who redefine and choose their future life, convinced that it is the only way to get out of the ordinary and to leave a real mark on people.