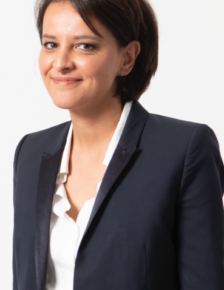 
A local elected official for many years in the Lyon region, Minister for Women's Rights and Government Spokesperson for two years (2012-2014) and then Minister for National Education, Higher Education and Research for three years (2014-2017), a position she was and remains the only woman to have held in France, Najat Vallaud Belkacem is a woman of long-standing commitment.

In 2017, she joined the private sector and took on the responsibilities of CEO Global Affairs at Ipsos, a leader in the market research and opinion polling sector. She also directs the collection "Raison de Plus" which she created within the Fayard publishing house to publish essays by researchers engaged in public debate, and teaches at Sciences-Po Paris where she created the programme "Equality between women and men and public policies".

In March 2020, she joined the NGO One (an NGO fighting against extreme poverty and preventable diseases) and became its French director. She is also President of the strategic council of the Tent Foundation which mobilises the world's major companies for the employment of refugees and a regional councillor in Auvergne-Rhône-Alpes.