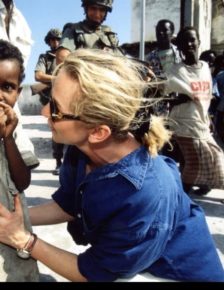 
Marine Jacquemin is a French reporter, director and producer. For the past 35 years, she has covered all the conflicts on the planet. After studying law and spending a year at Columbia University, she took a year off to travel the world, from the United States to Asia, via Africa. It was the chance of her private life that led her to the war zones. Her credo: "Not to risk your life but to live it". From 1989 to 2006, she worked for the TF1 channel and witnessed the fall of the Berlin Wall, which completely reshaped the world to come (revolutions in the East, the end of the Warsaw Pact, and then Iraq, Afghanistan, Rwanda, Chechnya...). In total, she has travelled to 70 countries and has reported on thousands of events in the world to date. At the same time, in 2007, she created ethic prod, a company dedicated to developing "passion" documentaries: from submarines to the summits of the world, from perfume to the madness of Dubai, an endless quest. Until today, she works with French and Anglo-Saxon productions as a front-line producer. Since this year 2022, she has turned to writing a feature film and a comic book series to come. Humanitarian : She created Enfants Afghans with Muriel Robin and Madame Chirac as godmother and Martin Bouygues as construction manager. Her idea: to build an enclave of peace in a world in ruins, Afghanistan. This is how the French medical institute for children was born within the framework of the Kabul Medical University. In 2002, Marine Jacquemin brought together "Afghan children" at the Chain of Hope, with the specialities of "open heart surgery and repairing handicaps". After meeting Princess Zara Aga Khan the same year, the foundation created by her father Prince Karim Aga Khan now manages the destiny of the 30,000 m2 hospital. Despite the arrival of the Taliban in 2022, the place should soon become a university hospital in a war zone that has lasted for four decades. A first in the world of humanitarian aid destined to outlive us.