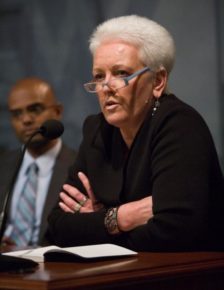 
Gayle Smith has served as a top advisor on international issues for three American presidents and is one of the world’s leading experts on global development and global health security. She recently took on a temporary role to serve as the U.S. State Department’s Coordinator for Global COVID Response & Health Security, where she played a leading role in the U.S. effort to end the global pandemic.

Previously, Smith has served as administrator of the United States Agency for International Development, as special assistant to President Obama, and as senior director for development and democracy at the National Security Council. Earlier in her career, she lived and worked in Africa for 20 years, working as a journalist and with NGOs. Smith is originally from Bexley, Ohio and earned a B.A. from the University of Colorado.


13:55
What is the world at risk of?
Amphi 1
Watch the overview Watch on-demand video